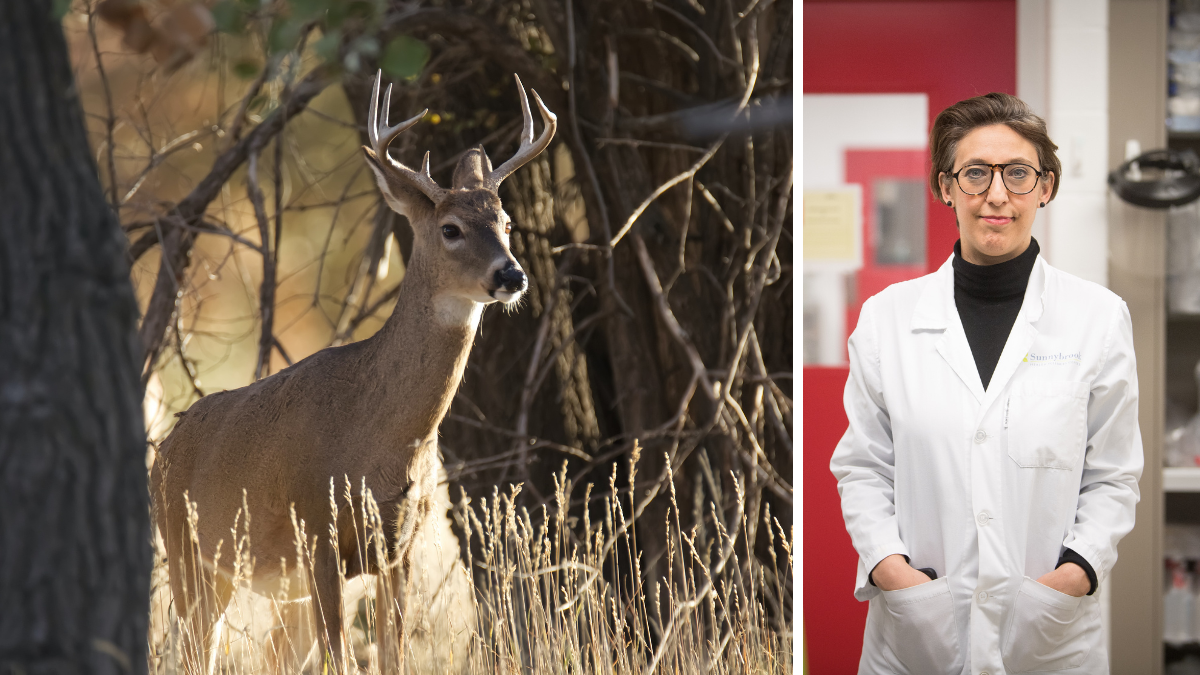 In the summer of 2020, months after the World Health Organization declared COVID-19 a global pandemic, Samira Mubareka and her colleagues started testing wildlife in Ontario and Quebec for the new coronavirus SARS-CoV-2.

“Pretty early in the pandemic, we knew that there was spillover from humans to animals,” said Mubareka, who is a clinician scientist at Sunnybrook Research Institute and an associate professor in the department of laboratory medicine and pathobiology in the Temerty Faculty of Medicine at the University of Toronto. “There were reports of zoo and companion animals getting infected, as well as outbreaks on mink farms.”

Wildlife surveillance is an important, but less discussed, aspect of pandemic response. Pathogens that can move back and forth between animals and humans, like SARS-CoV-2 appears to do, are especially worrying. When introduced into new animal hosts, the pathogen can establish a new reservoir of disease where new variants can evolve and potentially spill back into humans. The novel traits that a bacteria or virus picks up in animals could make it harder to detect or treat in humans and could contribute to more severe disease.

To address these complex questions, Mubareka joined a collaborative working group with researchers from universities, hospitals and leading provincial and federal government agencies.

The team’s initial surveillance of over 20 different wildlife species, including raccoons, skunks and bats, didn’t turn up any evidence of SARS-CoV-2 infection.

Then in 2021, researchers in the US started reporting widespread exposure of deer to SARS-CoV-2, which prompted Mubareka and her colleagues to focus their efforts on the white-tailed deer commonly found throughout Ontario and Quebec.

This time, they found what they were looking for. In what became the first detection of SARS-CoV-2 infection in Canadian wildlife, the group confirmed SARS-CoV-2 genetic material in nasal swabs from three deer in southern Quebec, including two from which they were able to isolate live virus.

In a new study published in Nature Microbiology, Mubareka and colleagues identified a new and highly divergent variant of SARS-CoV-2 in Ontario white-tailed deer, and the first evidence of deer-to-human transmission.

The new variant is a descendent of an older, parental B.1 virus, and has 76 mutations compared to the ancestral SARS-CoV-2 strain. In comparison, the Alpha, Beta and Delta variants had between 24 and 31 mutations while the currently dominant Omicron BA.5 variant has 105 mutations.

“I was not expecting to find this highly divergent virus, which suggests that it has been circulating and evolving in deer for months and months,” said Mubareka, who is a member of the Emerging and Pandemic Infections Consortium’s (EPIC) steering committee.

Even though the new variant had a few mutations in its spike protein, it was still recognized and effectively neutralized by blood samples from people who had recovered from COVID-19 or received two or three doses of the vaccine. This suggests that unlike Omicron’s mutations, the genetic changes in this variant are not helping it to evade the antibodies generated from vaccination or a previous infection.

The researchers also compared the genetic sequence of this new variant to sequences from humans who had tested positive for SARS-CoV-2 in Ontario around that time. Surprisingly, they identified one sequence that closely matched the variant from white-tailed deer, suggesting that the virus has spilled back into humans at least once.

“There are a lot of human-deer interfaces, including public interactions with wild deer and captive deer for farming, exhibition or hunting. For many communities, deer are important from both a food security and a cultural perspective,” said Mubareka.

Rather than deter people from interacting with deer altogether, the Public Health Agency of Canada issued new recommendations to reduce risk for hunters, trappers and other people who work closely with wildlife. These include wearing appropriate personal protective equipment when handling a carcass, processing carcasses outdoors or in a well-ventilated area, and cooking meat to an internal temperature of 74°C to kill any parasites, viruses or bacteria.

“Usually when you find a new virus that has spread between species, you want to understand how hazardous it is,” said Mubareka. “Our follow-up work is going to focus on what this virus does in human and animal cells and how it transmits.”

She is collaborating with Haibo Zhang and Theo Moraes, both fellow members of EPIC, to study how the virus behaves in lung organoids and nasal cells grown in the lab. She is also working with collaborators to delve into the deer immune system to understand how SARS-CoV-2 was able to evolve to such an extent in these animals.

To address the possibility of this new variant spreading from deer to other wildlife species, Mubareka is once again teaming up with partners at the provincial and federal levels, including the Canadian Food Inspection Agency, Ontario Ministry of Natural Resources and Forestry, and Ministère des Forêts, de la Faune et des Parcs in Quebec, and across multiple institutions to ramp up wildlife surveillance in southwestern Ontario and Quebec.

“In order to truly understand what this virus is doing in animal populations and how that could impact human health, collaboration is key.”

Mosquito-transmitted diseases affect an estimated 347.8 million people annually and are responsible for nearly 450,000 deaths each year, making them one of the most dangerous animals in the world. Despite their devastating impact, research on the mosquito has lagged behind that of other model organisms, in part due to the lack of appropriate tools and resources. Kathryn Rozen-Gagnon is trying to change that. Read more about how she is integrating diverse fields to study the interplay between mosquito-borne viruses and their mosquito and human hosts.

A conversation with with Jean-Philippe Julien, a senior scientist in the molecular medicine program at SickKids Research Institute and an associate professor in the departments of biochemistry and immunology in the Temerty Faculty of Medicine at the University of Toronto. He also holds the Canada Research Chair in Structural Immunology.

Researchers from the University of Toronto and Nigerian Institute of Medical Research have received $3 million from the federal government to launch an international project that will help inform the clinical and public health response to local and global epidemic of mpox. The new funding from the Canadian Institutes of Health Research (CIHR) and International Development Research Centre builds on the collaborative projects and seed funding from the mpox rapid research response launched by EPIC earlier this year.