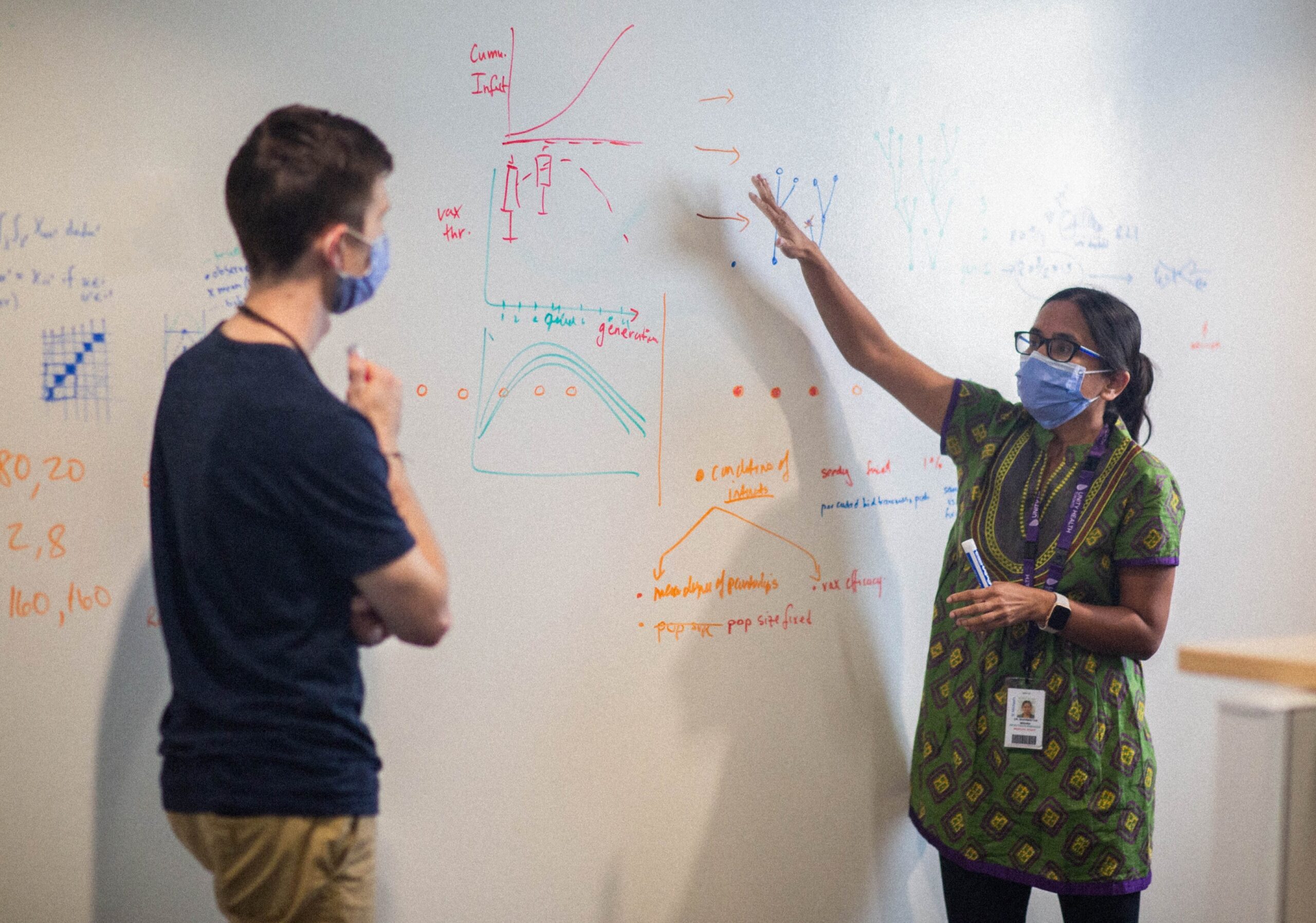 Jesse Knight (left) and Sharmistha Mishra (right) are the lead authors on a new modelling study looking at how to allocate monkeypox vaccines most effectively. Photo: Mark Bennett.

Less than three months since it launched, the monkeypox rapid research response led by the University of Toronto’s Emerging and Pandemic Infections Consortium (EPIC) and three partner hospitals is generating results that could help curb transmission of the virus.

“When monkeypox first arrived in Canada, we quickly learned about the stockpile of smallpox vaccine [which also protects against monkeypox],” said Jesse Knight, a PhD student in U of T’s Institute of Medical Science. “Given that the vaccine supply was quite limited early on, it was important to use it quickly and efficiently to help reduce cases.”

Knight is the first author on a new modelling study published in the Canadian Medical Association Journal that looks at how to optimize the initial rollout of vaccine to prevent the most infections. The study suggests that the greatest number of infections could be prevented by prioritizing vaccines to bigger cities with larger networks of communities at risk, the highest epidemic potential and largest number of initial cases.

Knight notes these results do not mean that areas outside of big cities should not receive vaccines, but rather they provide guidance on how to maximize immediate impact — early in an epidemic — of an extremely limited supply until more doses become available. Indeed, while Ontario’s vaccination efforts initially centred on Toronto, they soon expanded to areas outside the city.

The findings, which have not been peer reviewed, were co-authored by Knight’s academic supervisor Sharmistha Mishra and collaborator Darrell Tan, both associate professors in U of T’s Temerty Faculty of Medicine and clinician-researchers at St. Michael’s Hospital, Unity Health Toronto. Mishra and Tan are also co-leads of EPIC’s monkeypox rapid research response.

For their study, the researchers built a mathematical model that simulated the potential transmission of monkeypox virus in the context of sexual networks of gay, bisexual, and other men who have sex with men. The model reflects two interconnected sexual networks that can be thought of as communities within two cities — one larger network like in Toronto and a smaller network in a medium-sized Ontario city — and simulated the roll-out of 5,000 vaccine doses starting two months after the first case of monkeypox.

The team tested scenarios in which they changed the relative population size in each network (i.e., city), the interconnectedness between the two sexual networks (sex among individuals between cities), epidemic potential of the virus in each city, and the distribution of initial “imported” cases across cities.

A city’s epidemic potential reflects how likely a person carrying the virus is to pass it on to others, by taking into account the density and configuration of the sexual network, access to prevention and care, and the underlying social and structural contexts that shape sexual networks and shape access.

“Early insights from these analyses helped inform vaccine prioritization by health units across Ontario, which to date has centred on community-based organizations, service providers, health units, and public health teams at every level working together to mobilize access and deliver vaccines to gay, bisexual and other men who have sex with men who may be most at risk of infection,” said Mishra.

From the start, Mishra said, community leadership has been at the forefront of the response, including the science — with modeling questions, inputs, interpretation, and application shaped by communities and the public health actors working to serve communities.

Knight hopes that this work will also have an impact on how vaccines are deployed globally. “Given our increasingly connected world, our findings really highlight the importance of global vaccine equity in responding to outbreaks, and also in preventing them in the first place,” he said.

Vaccines can help break chains of transmission when deployed strategically, but another opportunity to stop transmission is in the environment — where people infected with the virus may shed it onto surfaces and objects.

“We knew very little about fomite [surface] transmission of monkeypox prior to this outbreak,” said Christopher Kandel, an assistant professor in Temerty Medicine’s department of medicine and an infectious disease physician at Michael Garron Hospital, Toronto East Health Network.

To address that knowledge gap, Kandel and Sharon Sukhdeo, an infectious diseases resident at U of T, teamed up with Temerty Medicine professors and EPIC faculty members Allison McGeer, Adrienne Chan, and Matthew Muller to study the risk of environmental transmission of monkeypox.

For the first part of their study, the team swabbed a mixture of high- and low-touch surfaces in hospital exam rooms where patients with monkeypox had received care. They tested the same surfaces again after the rooms had been cleaned.

Kandel notes that while they were able to detect monkeypox DNA, their methods can’t determine whether the detected virus was infectious.

As a next step, the researchers will expand their study to look at environmental transmission within households. They will ask people who are self-isolating with monkeypox to swab objects and surfaces in their home at different timepoints, which will provide insight into how long an infected person sheds the virus and whether common at-home cleaning products can effectively disinfect contaminated surfaces.

“There are so many questions that need to be answered,” said Kandel. “With these studies, we’ll have a much better understanding of monkeypox transmission, including how infectious people are and how long isolation should last to best protect others.”

World AIDS Day: Meet the next generation of HIV/AIDS researchers

On World AIDS Day, we spotlight eight talented trainees who are doing impactful work on HIV/AIDS.

World AIDS Day: Meet the next generation of HIV/AIDS researchers

On World AIDS Day, we spotlight eight talented trainees who are doing impactful work on HIV/AIDS.

On November 23, the University of Toronto’s Emerging and Pandemic Infections Consortium (EPIC) partnered with diagnostics industry leader bioMérieux Canada to jointly host a research symposium on Canadian perspectives on antimicrobial resistance: where we are now and looking ahead.